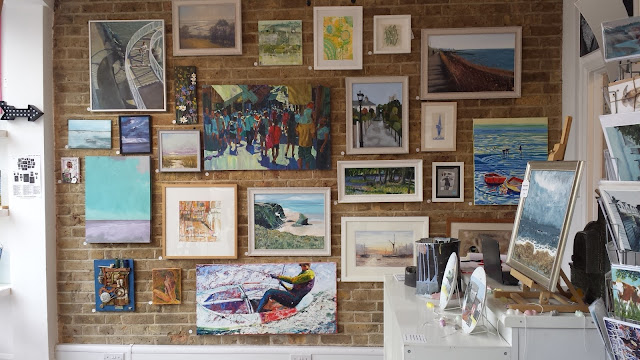 Spring has sprung over at miss annabel dee* gallery & studios on the Leigh Road, Leigh on Sea.  "Spring Fever" is the gallery's third open exhibition and is showcasing over 30 artists work over the next month.

"I'm so excited for the public to finally see this exhibition - there is such a wide range of styles and subjects.  We've had so many submissions - and we haven't got enough room!  We will be putting some of the paintings on rotation so everyone's work gets seen"  says gallery owner, Annabel Johnson.

The exhibition has attracted submissions from well known local artists such as Hashim Akib,  Paul Alcock and Malcolm Perry alongside other emerging local artists.  However one particular submission has come from slightly further afield - from South Africa.  Annabel has been working closely with London based curator Christian Ravina, whom she met at one of her own ceramic exhibitions at Sotheby's to raise awareness of the talented potters and ceramicists at the ELC Art and Craft Centre in Kwa-Zulu Natal

The exhibition is showing 5 pieces which have traveled across Africa to get to the gallery.  The craft centre is home to many a talented crafts person who under the apartheid years learnt to tell their truth whilst still concealing their personal stories and views of the world in which they were living. This ancient tradition of storytelling lives on. What is remarkable is the raw talent encapsulated in this work. Most of these artists have not been exposed to museums, art schools or the history of ceramics. Yet, their objects represent the very nature of a rich and compelling world.

"I'm delighted that Annabel, an experienced artist with a thriving career in Britain, is opening her space to these artists. Here she has generated an interesting dialogue between their pieces and hers, both of which I have enjoyed over the years, some being commissioned for my family and friends. Through my association with the David Rattray Foundation, a Zululand based charity that supports the education of local children, Annabel's interest in this work has been realised. And now there is the possibility of stimulating a new creative energy from these ceramicists in far distant Zululand, an energy that adds compellingly to their existing cultural identity" says Robin Woodhead, Chairman of Sotheby's, who was involved in the project.

The exhibition is a celebration of emerging and more established artists, 'It's great to see everyone's work together - the ceramics from South Africa with a backdrop of a Jackson Pollock-esqe painting, next to an oil painting of Leigh on Sea boats.  I'm excited about the public being able to see such a selection in a relaxed and welcoming environment'